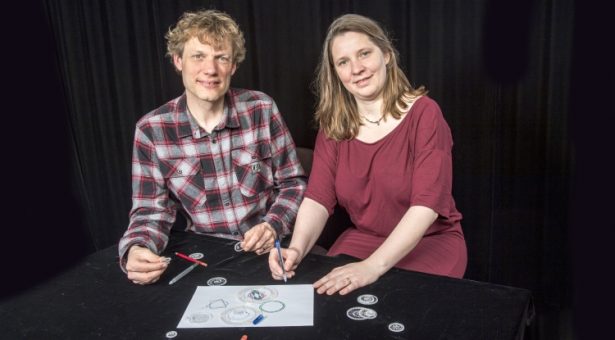 Researchers at the John Innes Centre recently announced a pioneering new technique which, if their hopes come to pass, will assist not only biologists but any scientist in the world looking to quantify shape.

Here, Dr Veronica Grieneisen explains why quantifying shape is so important and how music, a popular geometric drawing toy and some serious mathematical modelling – all helped to inspire a fresh approach.

What was the motivation for your study?

The shape of cells, organs and even entire organisms represent the outcome of how genes and proteins interact and trigger biophysical manifestations. Being able to adequately quantify the shapes of cells or organisms is therefore of ultimate importance for biology.

In the Grieneisen Lab, we were accidentally challenged by this problem during our study on how cells polarise. Cell polarity is the ability of cells to distribute internal proteins in spatial patterns, to create directions of preferential communication, movement or growth.

We were specifically interested in pavement cells. These misshapen `misfits’ of cell polarity make up the surface of plant leaves.

While most plant cells are typically brick-like in shape, pavement cells generate many protrusions, adopting shapes like jigsaw puzzle pieces. To describe these cell phenotypes, we were using in the lab words such as “skinny wiggly” cells, “chubby wavy” cells, or “zig-zagging sausages”.

But how could a computer or a quantifiable statistical measure be able capture this? How could we talk in a scientifically sound way about these findings? This is what unleashed a long search for an adequate mathematical representation of cell shape that would deliver biological relevance.

On the journey we discovered that there was an inherent issue (or rather, several issues) in a traditional method named Elliptic Fourier Analysis. So we joined forces with the Marée Lab at the John Innes Centre which develops automatised methods of cell segmentation and has expertise in pattern formation.

How is your study novel?

Cell shape can be very complex: it often requires a lot of information to fully describe the shape of a cell.

We decompose two-dimensional cell shapes into a series of ellipses – like those produced by geometric drawing toys such as Spirograph. Then we condense the full information of the cell shape into a specific series of numbers. The larger the series, the closer it is able to represent the original cell shape.

What is novel is that we were able to design a series in which the individual elements in the series are interpretable as biological properties, such as the number protrusions that can be observed in the shape and the magnitude of those protrusions.

In our thinking we were inspired by a music analogy which guided the mathematics that we performed.

Just as we can quantify the different “notes” played by instruments, our method is able to clearly retrieve the “pitch” of a shape.

As with music, we also wish to quantify how “loud” is that pitch is played, in other words, how pronounced these shape features are. For example, even knowing that a shape has 5 protrusions, these features could be large or appear as minute waves of low amplitude.

Our method, LOCO-EFA, is also able to exactly quantify that; just counting protrusions and measuring their amplitude would be a too limiting way to capture cell complexity.

In the same way we are able to distinguish between a violin and an oboe both playing an A, we need to distinguish “timbre” – the perception of what makes a violin sound different than an oboe.

In the shape space, subtle differences in “timbre” allow us to distinguish different species, mutants or wild types.

Again, this was made possible with our LOCO-EFA, by looking at the whole spectrum of LOCO-EFA modes, and analysing its distribution.

Were you surprised by anything you found?

To validate our method for a population of cells, we also modelled, using computer simulations, the interactions between many individual cells, each one wanting to adopt a certain specified shape, predefined by the model.

This shape was nicely picked up and quantified by our method, but, interestingly, we also found that these in silico cells that were put together in a tissue, interacting through space packing and adhesion, adopted a broad range of different shapes over the whole tissue.

These deviations in “pitch” (the number of protrusions of the shape), “amplitude” (the extent of the protrusions) and “timbre” (the diversity in the protrusion spectrum) were straightforwardly characterised by our method (which is perhaps why the journal Development, featured our method on its front page).

We were surprised to see and directly measure how shape complexity can emerge in a system in which (as we know because we programmed it all ourselves) preferred shapes that are actually simple.

The complexity emerged, only as a consequence of how cells interact with one another. This was an eye-opener regarding how we should interpret – as biologists – cell shapes observed in nature, and how to link it back to internal processes and the environmental aspects of that individual cell.

What are the limitations of you study?

Our study opens many doors in analysing shape, but not all shape-related questions can be answered. For example, while our method is very robust and good to characterise and analyses shapes in 2 dimensions, it cannot be used for 3D shapes.

This work is already being used to study cell polarity in plant cells, and also, through collaboration, leaf shapes.

It will be exciting to see this novel method being applied to a broad range of other cells, organs and organisms.

Importantly, LOCO-EFA can used for characterising any kind of cells population with complex shapes. For example, it could be applied to cancer cells and might be useful for diagnosis and biopsies. Also structures within cells can be quantified, such as mitochondria – allowing fast screening of mitochondrial defects.

What is your plan for following up on this study?

We are now able to follow how cell shape complexity is coordinated over the leaf as the leaf grows, and how this can change if mechanisms of cell polarity or cell-to-cell communication are altered.

This gives us a very deep insight into how cells make internal decisions, and how they interact with one another.

Moreover, LOCO-EFA, because it can capture subtle shape characteristics of each cell in a tissue, can also be used as a way for computers to identify the same individual cell in images that are taken at different time points.

LOCO-EFA modes then serve as a “fingerprint” for each cell, opening the doors to use it to track individual cells over time as they slowly change their shape.

Finally, our method is not only relevant for biology, but can be applied to anything else that adopts complex shapes: we are excited in making this method available to any scientist in the world needing to quantify shape.