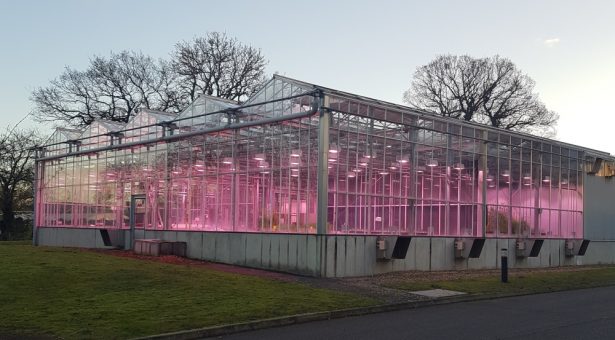 A project has been trialling LED lights in place of traditional sodium-vapour, and fluorescent tube lamps in selected glasshouses and controlled environment rooms here at the John Innes Centre.

The energy-saving initiative to upgrade artificial light sources to LED could significantly reduce energy consumption, and what’s exciting is that the new technology provides a more effective source of light for the growing plants.

The benefits of being as energy-efficient as possible are numerous and include the potential to save money, reduce our impact on the environment by reducing pollution all while decreasing our consumption of fossil fuels.

The nature of plant and microbial science research means sites such as the John Innes Centre inevitably consume lots of energy. The research we do here requires specific conditions of light and temperature to provide to aid plant growth all year round.

Light is a major component in many of our projects, whether for the growth of wheat and barley plants in our glasshouses, or for growing plants in our controlled environment rooms and cabinets.

The Norwich Biosciences Institutes partnership energy team, which covers the research institutes of the John Innes Centre, the Earlham Institute, The Sainsbury Laboratory and the Quadram Institute recognised that the large site could significantly reduce its energy consumption by using LEDs as a more efficient light source. Over the whole site, the scale for potential savings is massive.

In October 2017, a trial of the energy-saving lighting began in a selection of our glasshouses. Immediately, the orange glare of the sodium-vapour lamps was replaced with the purple glow of LED lights.

This upgrade was in response to the ground-breaking Speed Breeding project to accelerate the growth of wheat. Speed breeding uses enhanced LED lighting in intense 22-hour regimes of light.

The project has been an immense success and the team were able to achieve wheat generation from seed to seed in just 8-9 weeks, considerably faster rather than the usual 4 to 5 months under sodium-vapour lamps with 16 hours of light or in a naturally lit spring/summer glasshouse.

A plant’s specific needs determine which lighting is most appropriate for optimum growth. Most plants use chlorophyll which mostly reflects green light, but absorbs red and blue light well. This means most plants need red and blue light for healthy growth. Crucially, this project shows that LED lights are a high-quality and efficient source of light.

Upgrading these glasshouses to LED lighting has resulted in a 15% reduction in energy consumption, this is particularly impressive considering the light intensive nature of the Speed Breeding project.

NBI Energy Manager Jeremy Carter said, “This is a ground-breaking project in that we have successfully demonstrated we can grow crops under LED lights in a glasshouse whilst achieving significant energy savings”.

An even more impressive saving has been seen in the upgraded Controlled Environment Room cabinets. These cabinets, which provide a controlled environment for plant growth, are normally fitted with fluorescent tube lights. 51% of theses cabinets have now been upgraded with LED tubing.

The change has seen a massive 60% reduction in electric consumption.

These results make implementing the changes a worthwhile challenge for Jeremy Carter; “This has been an exciting project, we had to convince science to change the way their cabinets and glasshouses are illuminated.

This has been achieved through engaging with and forming strong working relationships, an essential element in any project that requires change.

The LED upgrade reduces the daily running costs of the cabinets from £2.30 per day to £1.17 per day, and with 96 cabinets on-site we’re seeing a significant saving”.

The reduction in electricity consumption is in part down to the reduced heat emissions of LED lights. By replacing fluorescent tube lights with LEDs, less heat is emitted which means less electricity is used by the air conditioning units to cool the controlled environment. This, combined with the fact that the LEDs themselves use less energy to provide the same amount of light means we can save electricity in two different ways at the same time.

Halfway through this project we can be confident in saying that from what we’ve seen so far LED lighting is a technology that improves our facilities and reduces costs.

We continue to upgrade the lighting in the remaining Controlled Environment Rooms, where we still need to replace a staggering 1,200 fluorescent tubes.