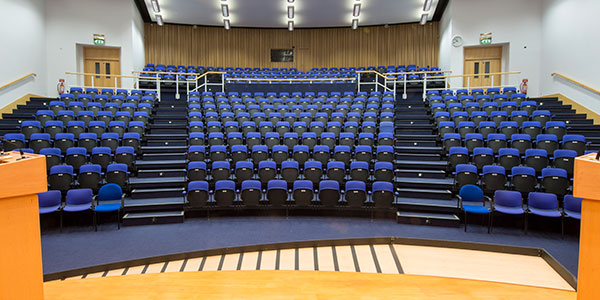 Opened in 1995, primarily to support John Innes Centre science, the John Innes Conference Centre is the premier facility of its kind in Norfolk and is the largest capacity venue in Norfolk to boast tiered-seating, with 320 seats. There are larger capacity facilities in Norfolk, but they are all flat-floor seating.

The Conference Centre was built to provide a bespoke space for science meetings, conferences, lectures and seminars.

Before it was built those things had to either take place in the Recreation Centre, or necessitated people traipsing over to UEA, which was an inconvenience.

A business case was thus drawn up and they sourced the money to build this facility, with plans to hire it out to external groups when it wasn’t being used for science. As such, the centre also features an adjoining exhibition foyer, meeting rooms and on-site car parking, meaning we can host a variety of events from lectures, seminars and conferences, through to corporate events, musical performances and chamber concerts.

Then, as now, all the money taken in booking fees, is put back into supporting John Innes Centre science.

We’re open 24/7 and can be hired out 7 days a week as a whole, or in parts and we take bookings from a range of people including corporate organisations, charities and fine arts groups and everything in between. We are fully licensed premises, both for alcohol sales and musical performances.

Science has priority, but once we take a booking from an external client, they have a contract for use on that date. What we say is if you want the space, book it ASAP. We host on average 2 events per week (over 100 per year), so we are busy.

We hold a mixture of daily science events, but we do much more than just lectures. For example, we have an ongoing relationship with the Norfolk Chamber Music group, who hold their concerts here as the auditorium boasts fantastic acoustics. That’s no accident it was designed so that the person on the back row, can hear what is going on, on the stage, as clearly as the person on the front row. The acoustics here lend themselves beautifully to chamber music. Plus, we have the Steinway piano, which is revered as the finest piano in Norfolk.

In my spare time I’m a musician, so I really enjoy the concerts we host here.

My favourite one was John McCabe, a Chopin specialist, who came and during his performance did John Cage’s ‘4:33’ and it was mind-blowing. I didn’t think I would get into it, but it was astonishing and one of the most memorable things that has happened to me during my time here. I don’t know how he did it, he just sat there for exactly 4 minutes and 33 seconds.

Being an event venue, we have also had some calamities and one that springs to mind is a large Headteacher conference, which featured a lunchtime performance by a dance troupe.

As the dancers were warming up in the corridor, unbeknown to us one of them accidently broke the fire alarm glass, which led to a full evacuation of both the Conference Centre and the John Innes Centre as a whole.

There was also a moment before the John McCabe concert where he couldn’t find his performance spectacles, his Manager and I led a panicked and fruitless search of the venue. We ultimately found them, on John’s face. He’d been wearing them throughout.

More often than not though things run very smoothly.

Conferences and events of the size we frequently host can take up to 2 years to plan and put together, they’re comparable to weddings in that regard, so they are often stressful times for the organisers, that’s where our expertise of doing this day-to-day comes in to its own.

Every time we get to the end of a conference like that, I feel a real sense of satisfaction, that me and my team have put on a successful day and the client is happy that they have got what they wanted and paid for.

Plus, each successful event we run, directly helps fund the science that takes place here, so while we may not be scientists, I feel we can all be proud of the role we play in helping facilitate the breakthroughs that happen here.

We have a big team, but I am the only full-time member as General Manager. I am supported by our Assistant Manager Mark who works part-time but flexibly around the needs of the centre and any bookings that week.

We then have a team of 5 Duty Managers, plus 7 expert AV Technicians, who work on an ad hoc, contracted, basis.

We are also supported by a team of porters, who will help prepare and dismantle event equipment. We could not do what we do without the porters.

Finally, we are supported by the Catering Team, who work in the on-site kitchen and a raft of Carpark Marshalls. If you add the team up, we have over 20 members of staff, helping make this place run smoothly.

In order to ensure things, remain smooth and successful, facilities like this constantly need to be future-proofed, so we are constantly working 2 steps ahead to ensure we can offer the best possible equipment. We are currently looking at improving our filming and recording equipment.

The facility costs around £100,000 per year, in running costs, maintenance, purchases etc. Anything we purchase, such as that new AV tech, or the 58 new, improved seats we added last year, we need to raise the money for those things, because the Centre is not subsidised by the John Innes Centre.

The Conference Centre, being as up-to-date and modern as it is already, isn’t going to be part of John Innes Centre’s Next Generation Infrastructure programmes, so hopefully we will be here, in this facility for many years to come.

It’s a great place to work and I feel very honoured to manage this facility.