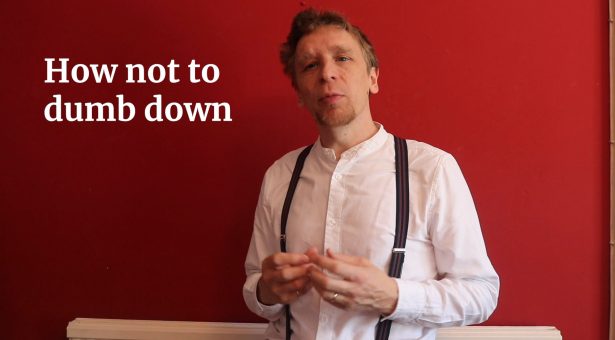 Outreach and Engagement expert James Piercy returns with Part 2 of his ‘How to give a successful talk’ blog series, today; how to communicate science without dumbing down.

If you missed ‘Part 1; How to prepare’, catch up here.

“Talking to laypeople about science often means simplifying the content to make it understandable, which can lead to complaints that the process of simplification results in dumbing down the science and ultimately making it inaccurate.

Telling people things which aren’t true is clearly to be avoided but giving all the information can make the science incomprehensible or even off-putting. So, what’s the solution?

All science communication is about two things; being clear about these before you start writing or speaking will make the job easier and more effective. It will also make it easier to maintain accuracy if you consider the questions I laid out in how to prepare; why am I giving the talk, what do I want to achieve and who am I speaking to?

Once you have answered those questions, you will have much clearer idea of what to tell them and crucially what to leave out.

Bear in mind at this point, there is a difference between ‘accuracy’ and ‘precision’.

While it is important to keep the content of science communication accurate it is not always necessary for it to be precise and it is possible to say something which is true without giving the level of detail that scientists would usually expect when communicating with their peers.

A useful tool here is to think what will happen if I tell the whole story? Will I have to contradict something I have said before or am I just adding detail?

Newspapers adopt the inverted pyramid approach to story-telling. The headline gives the story, the first paragraph adds basic facts, as you read further down the piece you will get more elaboration and detail. In good journalism you will never find a point in the story that contradicts what went before.

How far down the pyramid you travel in your science communication depends on the audience you are engaging with.

Make a decision on what they need to know, what is important to your audiences, adding more detail might not increase the impact of your talk and could mean people switch off and not take anything away.

For example, when explaining photosynthesis to a 6-year-old, you won’t need to use the word chloroplast in order to accurately convey the key information – for that audience – namely that plants gain energy from the sun.

You haven’t given every piece of information there is to know, but you also haven’t said anything inaccurate.

For more complicated explanations, there are a number of tricks and techniques that can help you communicate what you know, in a way that is both accurate and accessible.

The use of analogies is common in science communication. They are a useful tool, because they allow you to link something new and unfamiliar to an everyday experience.

For example we can think of an atom as a miniature solar system. The electrons around the nucleus are like planets orbiting the sun.

Care needs to be taken so that audiences understand that these are a model for the thing being explored and not exactly the same. Also note that, pointing out the differences can sometimes be as useful as comparing the similarities.

Sometimes it is possible to demonstrate the effect you are describing or show images which allow people to better understand what you are you are talking about. Showing the outcome of a reaction in real time or via video recording can help understanding and save complex verbal descriptions. Again be careful to make it clear if the demonstration is an analogy rather than the real thing. Images of objects can be particularly useful when you are exploring things which are very small or very large.

It is possible to make complex ideas accessible without dumbing down, but it needs thought. Remember the top tips. Think about what you want say, and who you are saying it to, and don’t try to do too much.”