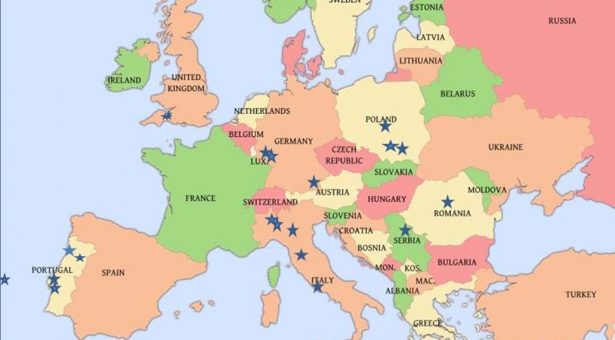 An important part of our work is to encourage and enthuse the next generation of scientists. As such, I wanted to create a project that would engage school children and involve them in a real science investigation, which I was able to do as part of a European project (MAQBAT).

We wanted to show children how genetic diversity is used to improve crops, with emphasis on disease resistance.

To reach schools across Europe, I contacted Dr Phil Smith from the Teacher Science Network who has a large database of contacts throughout Europe. In total 21 schools were interested in taking part they were from Poland, Portugal, Germany, Italy, Romania, Serbia and the UK.

I then developed a kit which was sent to each school with seed from five different brassica varieties, Jiffy pellets (dried soil pellets that expand when soaked in water) and a disease guidebook. I also wrote a user-friendly instruction booklet about how to grow the plants.

Once the seeds were sent out, I set up a private Facebook group so the schools could talk to each other, share pictures of their plants and ask me questions.

The group proved to be very popular and I received some excellent feedback from the schools involved.

It was really pleasing to see schools liaise directly, as one of the children involved said; “It was very useful and interesting that because this project is European in scale, we could communicate with other schools through the facebook page”.

We hoped the plants would encounter disease such as light leaf spot, Sclerotinia and mildew, however they remained annoyingly healthy, with the worst being attacks by hungry caterpillars.

With no disease for the schools to observe, the focus of the project changed to looking at how the differences in climate was affecting the growth of the plants.

This was clear to see as the plants in Romania where it was sometimes as low as -30° were small and stunted whereas in Portugal, with an average temperature of 15°, they were large and produced many seed pods.

The project had the added bonus of also teaching the children about the challenges of growing crops.

For example, Miguel Friexo from Garcia de Orta in Porto, Portugal told us; “the most important “lesson” I learned was how difficult it is to grow a healthy plant without pesticides and fungicides or without fertilisers. It made me open my horizons and understand how agriculture and crops work.”

I was really impressed by the enthusiasm of the children involved. They were keen to continue the investigation, and as a result we have decided to focus the project on climate during 2018.

The schools involved will each be sent a device that will automatically record temperature 4 times a day, and once a week they will be asked to measure the height of the plants and count the number of leaves.

I will be working with some of the schools I worked with last year and a few new ones.

The project will start in the last week in January 2018. E-mail me – rachel.burns@jic.ac.uk for more details.