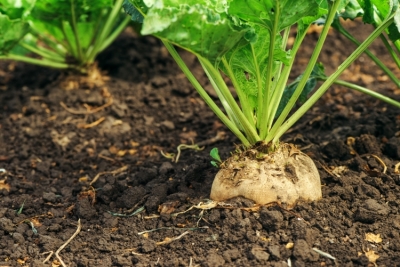 Recently, a group of 30 scientists, farmers and related stakeholder groups, from the UK and USA, gathered at the John Innes Centre for an Organic Farming workshop, supported by a BBSRC US partnering award.

The workshop allowed new ideas to be shared, and improved ways for scientists and farmers to work together, to address common challenges in conservation and organic agriculture.

The day began with discussions between conservation farmer John Pawsey and Dr Chris Ridout, a crop scientist at the John Innes Centre. While conservation and organic agriculture differ substantially, they can often require similar crop traits and varieties.

Both John and Chris felt that farmers would be interested to find out more about research in crop breeding, and farmers could provide insight into their challenges, which might be addressed through research.

The workshop largely focused on research into cereal varieties, including wheat and barley. But also included discussion on valuable rotation crops such as legumes.

Many of the farmers involved in the workshop found that current crop breeding of new varieties and those on the recommended list of varieties, do not meet the requirements of growers, particularly in the organic and conservation agriculture sectors.

Farmers were looking for more resilient crops, capable of withstanding the pressures of weed competitors, reduced nitrogen soils and pests and diseases.

High yielding varieties, which have been a focus of breeders historically, require high inputs to produce their high yields at the expense of resilience and flavour and these often do not cope well with the lower input systems used by organic and conservation growers.

The workshop found that on both sides of the Atlantic, the challenges for those growing with an organic or a conservation perspective are the same; with weeds, fertility and disease featuring among the main concerns of the group.

Many participants emphasised that a trait of interest was flavour, which has not been selected for in recent breeding practices. The day highlighted that for those growing heritage crops, who often have direct sales of flour to the public, flavour is an important trait.

From the discussions, the key crop traits that were identified as desirable for conservation and organic agriculture were;

Researchers working on traits explained and demonstrated that solutions to some of these challenges might come from historic seed collections, which can provide useful traits that have been lost from modern day varieties.

The John Innes Centre is home to the BBSRC-funded Germplasm Resource Unit, a huge archive of seed including collections of wheat, barley and pea varieties from across the globe.

These seeds are being used to identify traits of interest which could then be used to breed new bespoke varieties for farming practices where there is a greater emphasis on reduced inputs, resilience and soil health.

The Organic Research Centre is also trialling several lines in participant trials with farmers to look for more resilient crops.

Dr Chris Ridout summarised; “There is an increased need for the trialling and marketing of crop cultivars for organic and conservation agriculture. The Organic Research Centre are already doing trials, but there may be scope to increase this activity, and to include on-farm evaluations.”

Overall the workshop was a successful discussion between scientists, farmers and stakeholders, providing a forum to work together.

Using current and future research will help to provide potential solutions to the conservation and organic farming industries, to develop more resilient crops for the future.