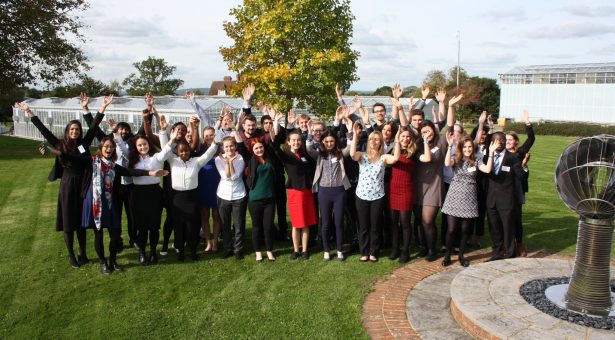 On Wednesday 4 October at 6:30 am, four enthusiastic John Innes Centre PhD students started the drive to Jealott’s Hill, Syngenta near Reading for the Plant and Microbe BiotechYES competition.

After a navigational error that took us to Watford (thanks Adam), we arrived some four hours later.

The team, Roger Castells-Graells, Adam Gauley, Sophie Harrington and myself had transformed on the drive. Leaving science behind us, we had become entrepreneurs and developed a hypothetical-but-plausible business c

The YES (Young Entrepreneurs Scheme) competition aims to teach young scientists business skills, equipping them to translate research from the lab to the business-world.

Over the course of three days, participants design and pitch (dragons’ den style) a novel, hypothetical biotech business. They are given talks from experts on business (such as intellectual property, finance, etc), one-on-one tutoring with experts for shaping their idea, as well as inspiring talks from biotech start-ups.

My favourite talks were by successful companies: CuanTec, Oxitech and Epona Technologies. It was eye-opening to see how much work, and risk is involved in starting your own company, and perhaps surprisingly how little the company you own by the of the time you have secured funding. However, it also appeared to be extremely rewarding to see your own ideas to become a reality.

The event also meant that we got to meet with the six other teams from across the country, from Imperial to Nottingham. On the first night, alongside a three-course meal, Syngenta provided wine tasting throughout, which certainly improved networking between the teams. Halfway through the evening each team gave a one-minute elevator pitch. Ours saw us win some extra Champagne.

Friday was competition day. Each team gave a 15 minute pitch with 10 minutes of questions to a panel of three judges, including Syngenta’s head of science acquisition.

Following this, the panel would decide which two teams would progress to the final at the Royal Society, London.

Our company, Active Plant Protection, was in its second year and asking for $3.6 million to carry out field trials on our first product: SolanoPro™.

SolanoPro™ was (or is…) a microbe we made that attracts predators (like wasps or ladybirds) to plants when they signal distress. The idea being that the predator would eat the herbivore that was attacking the plant – a green revolution overcoming the need for pesticides.

It felt like the pitch was over in a matter of seconds. The questions at the end, which I thought would be the most gruelling, seemed to last only 2 minutes, not 10. The pitch went smoothly enough, with everyone remembering something to say, and other competitors congratulated us as we sat back down. We hoped we had done enough to win, but were by no means betting on it.

We were one of the last teams to pitch, making the wait for results much shorter than for other teams. Finally, after a buffet-style lunch, that seemed to drag on forever, the winners were announced.

Two teams were selected to go through to the final at the 12 December. In no particular order, but definitely the more stressful one, Hygrow (University of Nottingham) was announced as a winner, and a long pause later – we were too!

After an exhausting, but successful three days, we began the drive back to the John Innes Centre. We are now excitedly preparing for the final in December.

This was by far the best training that I have attended during my PhD and would highly recommend it to anyone interested in commercialisation.

Feel free to get in touch with me if you have any questions.