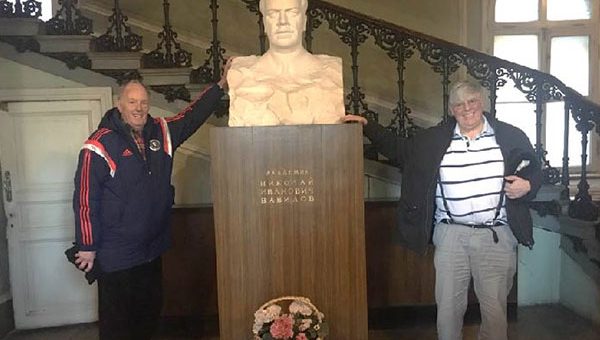 The specific destination in this case was the N.I. Vavilov Institute of Plant Industry, named after prominent Soviet geneticist and botanist Nikolai Vavilov.

A venture into the building and conversations with the institute’s director (Professor Igor Loskutov) revealed far more than a vast collection of germplasm encompassing 250,000 plant specimens and the potato seeds that formed the foundation of British potato breeding. In an excerpt from the July issue of the quarterly newsletter for the International Society of Plant Molecular Farming, below, Professor Lomonossoff elaborates on his recent visit, a tale of scientific devotion in the face of adversity and the fundamental connection between Nikolai Vavilov and the John Innes Centre’s first director, William Bateson.

he 15th Feb. 2017, myself and Dr. Ian Gibson (former Dean of Biological Sciences at the University of East Anglia, UK and former Member of Parliament for Norwich North) had the opportunity to visit the Vavilov Institute (or, to give it it’s full name, The N. I. Vavilov Research Institute of Plant Industry) in St. Petersburg, Russia. The building is in St. Isaac’s Square right in the centre of the city. We were very fortunate to be shown around the Institute by its current director, Prof. Igor Loskutov. The building itself is of an impressive design dating from the late Imperial Russian period and provides a fascinating insight into the history of plant genetics and breeding. To this day, it houses a very important and extensive germplasm collection.

For those readers not familiar with the work of Nikolai Vavilov (1887-1943), he was an eminent geneticist and plant breeder who went on numerous expeditions to collect germplasm from all corners of the globe in the first part of the 20th Century. In 1913-14, he travelled to Europe and met William Bateson, one of the founders of modern genetics, at the John Innes Horticultural Institute in Merton, South London.

After the Russian revolution (1917), Vavilov was head of the institute that now bears his name from 1921 to 1940, during which time he created the largest collection of plant seeds in the world. Following disagreements with Trofim Lysenko, he was arrested in Aug. 1940 while visiting a research station, condemned to death on charges which, even to this day, are unclear and died of starvation in prison in early 1943. He was rehabilitated after Stalin’s death and the institute was formally named after him in 1969. There is currently a bust of Vavilov at the entrance to the institute.

Given Vavilov’s tragic personal history, our visit had an emotional as well as scientific side. His office is preserved and includes his last known written communication after his arrest, simply asking for his luggage to be forwarded to a certain address. In addition to seeing Vavilov’s office, we were also shown those parts of his collection that survived the siege of Leningrad between 1941 and 1944.

The collection had to be guarded as it was potentially a target for the starving population of the city, as well as the rats which infested the building. There is also a plaque near the entrance listing the names of the 9 members of staff who themselves died of starvation during the siege rather than eat the precious collection – true dedication to science!

In addition to continuing to house an important germplasm collection and being actively involved in plant breeding, the Vavilov Institute also holds regular scientific meetings. The next of these will be held to mark the 130th anniversary of Vavilov’s birth and is entitled “N. I. Vavilov`s Ideas in the Modern World”. The meeting will take place in St. Petersburg 20-24th Nov. 2017 and further details can be found at: www.vavilov2017.org

Vavilov came to the ‘John Innes Horticultural Institution’ (JIHI) as a visiting worker in the autumn of 1913 and the first part of 1914 to study with William Bateson, founding Director of JI (d. 1926).

There is a small folder of correspondence between Vavilov and Bateson, including a long hand-written letter dated 28th November 1915 in which Vavilov describes his work in Britain and how he wants to progress it in Russia. He mentions all the scientific institutions he visited before he left England.

The letter also reveals that he no longer has access to foreign periodicals and books due to the War, that he may have to go into military service in a couple of months’ time, and that part of the luggage he sent to Russia on his return from England was sunk in the North Sea when the steamer struck a mine.

Among the precious things he lost was his portrait of Bateson, and a copy of ‘Bateson’s answer to Pearson in 1902’ (Presumably Bateson’s Mendel’s Principles: A Defence) (WB/K88). There is also a second folder of copied correspondence, some of it held in other archives (WB K/111).

Bateson’s visit to Moscow and Leningrad, 1925

As well as correspondence with Vavilov, who helped Bateson organise the Russian trip, there is a series of 8 photographs taken when Bateson visited the State Darwin Museum (WB/A.34-35). This was when he saw the sculptors at work carving busts of scientific heroes including Darwin, Mendel, E. St. Hilaire, E. von Baer, and T. H. Huxley among others- all figures important in the history of evolution.

Bateson’s correspondence about the visit reveals that the USSR’s policy was to replace religious icons with scientific heroes. The photographs include a fine picture of Bateson under a bust of Mendel with a genetics exhibit behind him:

After the trip Bateson wrote a report on the state of Russia’s science and scientific institutions in consultation with Sir Henry Miers and Professor D’Arcy Thompson who were among the British delegates.

This was published in Nature on November 7th 1925- we have a copy in the John Innes archives. We also have the manuscript draft of the Report and correspondence between Bateson and others about what he’d written pre-publication (WB/G2-4).