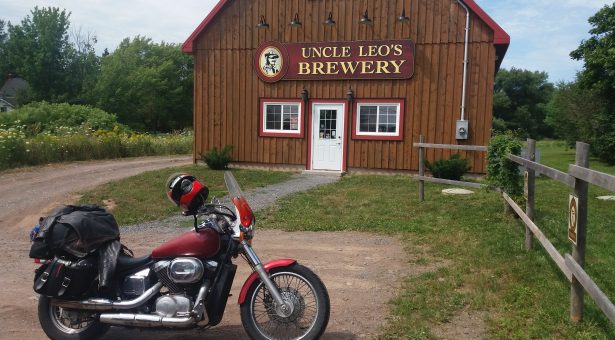 In the summer of 2015 Catherine Jacott went to Prince Edward Island, on the Eastern coastline of Canada for her PIPS* placement to research the growing craft brewing industry in the Maritime provinces, at Agriculture and AgriFoods Canada.

We asked her to tell us more.

“Canada’s Maritime provinces consist of Prince Edward Island, Nova Scotia and New Brunswick. They have a small population compared to Canada’s central provinces and the New England states and the regional economy is tied to natural resources such as fishing, logging, farming, and mining.

Similar to the rest of North America, the number of craft breweries in the Maritimes is increasing and there is a growing movement towards the consumption of local ingredients. However, very little malt barley is grown in the Maritimes. The barley currently grown forms part of a crop rotation and is used for animal feed.

Instead, malt barley is grown and malted 4,000 km away (just under 2-days solid driving) in Canada’s Prairie Provinces, then shipped cross-country. Obviously, this does not meet the popular criteria for “locally-produced”.

As such, there appeared to be an opportunity to produce high-value local malt in the Maritimes. However, first there were some things to consider;

Once I arrived in Canada, I began working with a local Agriculture and AgriFoods Canada scientist, Aaron Mills, who in-turn was working with local farmers to advise with barley growing. He was also keen to establish some local malt houses.

As a scientist, Aaron spends his days in the lab and conducting field trials. So, while he has contacts with lots of the brewers, he doesn’t have the time to go out and speak to people. This is where I came in…

The purpose of my PIPs placement was to conduct a value chain assessment by interviewing members of the malting barley supply chain, particularly local brewers.

We were particularly interested in the thoughts of the brewers, because they were mostly quite new, and a lot of the people involved hadn’t had brewing training. Often, they were from farms or pubs that had decided to branch out into brewing.

The aim of my project was to establish current knowledge levels, interest, concerns and requirements of local brewers and to suggest how Agriculture and AgriFoods Canada can contribute to the supply chain above and beyond core malt barley research.

Beer is composed of around 95% pale malt, topped up with 5% specialty malts, which are malts that have been roasted in different ways. This small percentage of specialty malt can make a big difference to the end product.

Chemical components such as protein/starch/enzyme content can also influence the brewing process.

Commercial malt houses provide a malt quality analysis which tells you the chemical composition of the malt.

Before I spoke to them, we didn’t even know if local brewers were looking at malt specifications. Were local brewers using this information to adjust the beers they were creating?

Initially it was difficult to get adequate responses or insight through questionnaires; therefore, I drove to each brewery and met the brewers face-to-face.

Due to the scale of Canada, I spent a lot of time on my motorbike travelling between breweries and camping. It was great fun and I learnt a lot about communication, forming relationships, being independent, organisation and time-management.

Meeting with brewers meant I got to spend lots of time immersed in their day-to-day work lives and gained an invaluable insight into their opinions and the challenges faced by the industry. I also learned a lot about the brewing process as I helped for a weekend in one brewery, picking hops and brewing their Autumn Special Pumpkin Beer.

In total, I interviewed 31 craft breweries, asking a lot of questions including; which malts did they use the most? Which malts were the most interesting to them? Would they buy local malt and what information did they need from a maltster?

I found that the primary reason for considering using locally produced malt was a desire to support the local economy and keep money in the Maritime provinces. Overall, breweries were open to pay slightly more for local produce.

However, there was concerns about using local malt because the perception was that small-scale malt growers wouldn’t know what they were doing.

In theory they were interested but concerns and suspicions remained.

We also discovered that all of them wanted a malt specifications report. However, they would only use this as reassurance of quality, not to alter their brewing. This differed from big commercial breweries, who had brewers trained in the interpretation of the chemical analysis and would change their brewing accordingly.

There is a real opportunity here for small businesses, but everyone was hesitant.

There is already lots of barley grown on the Canadian East coast and there are much larger financial incentives to produce malt barley rather than animal feed, but the feeling persisted that nobody knew where to start, especially given the monopoly of the big malt houses in Canada’s Prairie provinces.

The final issue I uncovered was a lack of communication in the supply chain; with the channels between brewers, malt houses and farmers all in need of improvement.

With my research completed and before heading home, I compiled all that I learned into a report, which will be used to help Agriculture and AgriFoods Canada advise farmers, maltsters and breweries and hopefully bridge some of these gaps in the brewing industry supply chain.

Now that I am back at the John Innes Centre, I initially felt this would be an area I would go on to pursue, but instead my research has taken a mechanistic turn and moved away from barley research.

I’m currently looking at arbuscular mycorrhizal fungi (still in barley but mostly Medicago) and am researching a potential trade-off with disease resistance. I am really enjoying my lab work at the moment and remain very grateful for the opportunity to do a PIPs placement as part of my PhD.

The PIPS scheme is beneficial because it allows you try something different, without the risks of moving from job-to-job. It gives you the opportunity to experience new things and teaches you many transferable skills. The scheme can broaden your horizons from the narrow focus of life in the lab and highlights the connections between scientific research and the real world.”

*The PIPS (Professional Internships for PhD Students) programme is a mandatory part of the 4-year Doctoral Training Programme, where you go away for 3 months and do something not directly related to your PhD research project. It’s a great idea to do early on in your PhD because it allows you to take a break and do something totally different.