Although different types of cells come in a variety of shapes and sizes, most cells are able to maintain a fairly consistent size and shape as they grow and divide.

For example, the rod-shaped cells of the fission yeast S. pombe grow to be 14 microns long before dividing in the middle to form two new cells. This prevents any single cell becoming too large or small.

A similar phenomenon has been observed in other types of cells, so it is clear that cells must be able to measure their own size, and then use that information to trigger cell division.

A number of proteins that regulate cell size and cell division in fission yeast have now been identified.

These proteins form a pathway in which a protein called Pom1 inhibits another protein, Cdr2, which in turn causes a third protein, Cdk1, to start the process of cell division.

However, the details of the measurement process and the property that the cells are actually measuring—surface area, volume, mass or something else—remain mysterious.

In collaboration with the group of Fred Chang (UCSF), we have used imaging techniques and mathematical modeling to probe the distribution and movements of proteins in fission yeast cells.

Their results do not support a previous model in which the cell uses the gradient of Pom1 as a ruler to measure cell length.

The group have therefore proposed a new model in which the level of Cdr2 is used to sense the size of the cell. Individual molecules of Cdr2 come together to from clusters called nodes on the cell membrane. As the cell grows larger, more and more Cdr2 proteins accumulate in these nodes, which are found in a band around the middle of the cell. When the cells reach a critical cell size, the increased concentration of Cdr2 at these nodes may help to trigger the start of cell division. 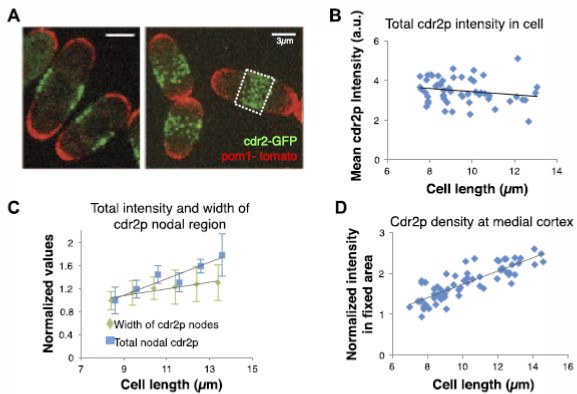 By examining cells that grow at different rates, the Howard group showed that the density of Cdr2 in the nodes depends on how big the cells are, rather than on the length of time that has elapsed.

Analysis of fission yeast cells of different shapes shows that cell division starts when the surface area of the cell grows to a certain value, as opposed to starting when the volume or length reach a given value.

The group have also demonstrated that Cdr2 binds to all parts of the cell membrane, not just to the nodes near the middle, and provided a simple mathematical model showing how this property can allow cells to measure their surface area.

Through this mechanism the cell is able to convert an analogue signal of cell area and make a discrete all or nothing decision to divide at an appropriate size.