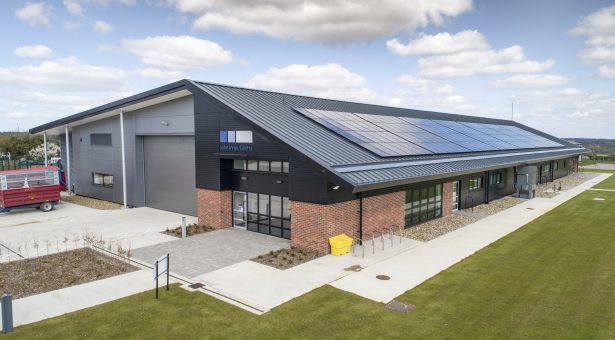 On Thursday 23 May we are officially opening our Dorothea de Winton Field Station, with a public opening from 4pm – 6pm.

We are opening our doors to provide a chance for everyone to find out more about the work that the John Innes Centre does in Bawburgh and beyond, and to meet the scientists who work on-site. We’ll provide guided tours, and introduce you to some of the scientific research, machinery and history of our field trials.

This event is family friendly and the building is accessible by wheelchair. If you wish to visit the field trials you’ll need to wear sturdy shoes or boots.

The purpose-built field experimentation station, the Dorothea DeWinton building, has been funded by the Biotechnology and Biological Sciences Research Council and the John Innes Foundation to enable co-location of our field trials with state-of-the-art laboratories, seed and crop processing facilities and a specialist seed storage unit. The Field Station realises a long-held ambition for the John Innes Centre, bringing together lab and field in one location, providing integrated facilities for research into how genes control plant growth in the field.

The Dorothea de Winton Field Station is set in 110 hectares of sandy clay loam at Church Farm, Bawburgh, near Norwich, and enables scientists to grow experimental material in a commercial farming environment.

Up to 15 project leaders from the John Innes Centre grow plants at the site including wheat, pea, barley, and oilseed rape. The facility will also be used by researchers from The Sainsbury Laboratory, Quadram Institute and the Earlham Institute, all based at the Norwich Research Park.

The unique germplasm grown and stored may be the product of many years’ development and research and will be kept in the medium term as a resource for researchers and breeders across the world. Resources include tools that will allow plant breeders to produce new varieties that are more reliable, nutritious and resilient to pests, diseases and a changing climate.

The majority of the funding for the £4.3m facility comes from the Biotechnology and Biological Sciences Research Council (BBSRC) with a contribution from the John Innes Foundation.

The building, designed by King’s Lynn-based architects Calvert, Brain & Fraulo Architectural Limited and built by R.G Carter Construction, brings together facilities that have previously been distributed across several sites.

The facility is named after Dorothea De Winton; a geneticist who worked for the John Innes Centre from 1920-41.

As a young woman Dorothea de Winton became interested in gardening and between 1916 and 1919 worked as a professional gardener. In 1919 she wrote to William Bateson enclosing a card of introduction from Ernest Innes, Trustee of the John Innes Horticultural Institution.

She expressed her interest in gardening and her wish to ‘go in more for the scientific side of it’. She asked for a job on the outdoor staff at JI, hoping to work on the culture of experimental plants with a view to later qualifying for research work. She wrote ‘At present I know a little botany and the first principles of Mendelism but am intensely interested in it all’.

In April 1920 she was appointed to the JI staff on a salary of £150 per year and worked on Primula sinensis. She was continuing the late Reginald Gregory’s experiments on tetraploid forms; he had been a casualty of the 1918 influenza epidemic.

In 1922, when the Genetical Society visited JI, Dorothea gave demonstrations on the genetics of peas and Primula sinensis. She was now a ‘technical assistant’ at £200 p.a; her salary increased again to £250 in 1923 and £350 in 1925. Between 1920 and 1926 Dorothea collaborated with Bateson on Primula sinensis (linkage studies), taking charge of the experiments after his death. Dorothea also drew on Caroline Pellew’s work on linkage in peas; together they visited Vilmorin’s (pea) nurseries near Paris in 1927. (She was en route to present her work at the International Genetical Congress in Berlin).In 1929 she was given the title ‘Geneticist’ at the John Innes Horticultural Institute.

Between 1927 and 1941 Dorothea continued to work on the genetics of peas and P. sinensis, initially with supervision from J. B. S. Haldane, but the Primula work dominated after 1936. (The disease problems experienced by staff looking after Dorothea’s experimental seedlings, incidentally, led directly to the development of John Innes composts). In her last years at the institute she collaborated with Kenneth Mather on breeding systems in Primula and together they made important contributions to the genetics of heterostyly.

Dorothea’s 20 years breeding work on P. sinensis and her knowledge of the forty mutants, half of which she had discovered herself, was the basis of linkage studies with this plant. The innumerable gene combinations she was able to demonstrate were appreciated each year by large numbers of students. However, when Haldane left in 1937 Dorothea, who had closely collaborated with him, was left in a vulnerable position.

Her salary was increased to £370 p.a. and the intention was to retain her until she reached 60 years of age. However, a new Head of Genetics (Mather) and a new Director (Cyril Darlington) in 1939 meant changes were sweeping through the Institution. In 1941 she was told a drop in the Institution’s income meant her post would be terminated, but she was to be re-appointed at £200 p.a. Dorothea found this unacceptable and left JI to become a plant breeder at Messrs Ballard in Worcestershire, a firm of aster specialists.