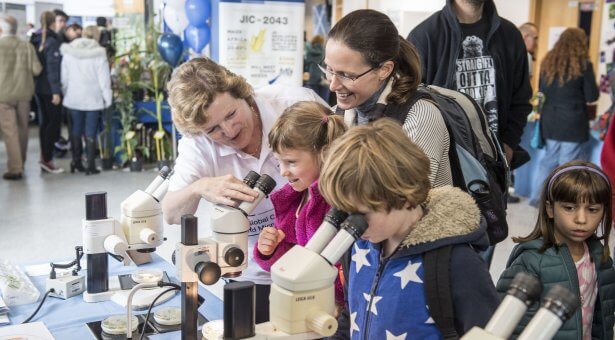 At the John Innes Centre, public views are at the heart of our research strategy and engaging with the public is an important part of our mission statement.

To that end, our scientists recently carried out a public dialogue project to identify those factors the public would like us to take into consideration when planning our science programmes.

As a publicly-funded institute, it is important that people are involved in discussions with scientists and that we reflect on public opinion, which resulted in some clear principles emerging.

1.  Preserve the right to do basic, curiosity-driven research

Fundamental discoveries in bioscience underpin scientific understanding and may lead to new breakthroughs.

Much of the John Innes Centre’s research is in this area; an example is the work with the soil bacteria Streptomyces which give rise to half the world’s antibiotics in use today. John Innes Centre scientists pioneered research in Streptomyces genetics more than 60 years ago and this work has contributed greatly to human health.

2.  Consider research with the greatest scope to tackle the most serious global problems

Research has implications with far-reaching impact. For example, the John Innes Centre’s wheat research has led to crop improvements in countries where millions of people struggle to produce enough to feed their families.

The public would like the John Innes Centre to continue a focus in this area, consider the applications of science that will improve lives for the greatest number of people and tackle diseases that are most severe in their effects.

3.  Consider who stands to gain from the outcomes of John Innes Centre research

The public felt it was important to consider potential end beneficiaries at the start of research programmes, so that the John Innes Centre could be accountable to the public by considering consequences that may arise from research decisions.

4.  Use public money to address areas of interest that commercial interests will not

The public felt that the John Innes Centre, as a publicly-funded institute, should consider research which may lie outside of the commercial sphere.

For example, participants would like to see scientists taking account of the interests of small scale farmers as well as of multinational businesses, helping UK farmers as well as those abroad, and researching critical illnesses affecting UK citizens alongside global health.

5.  Continue to recruit the brightest and the best

The public thought the creative and non-hierarchical structure throughout the John Innes Centre was inspiring and wish the institute to continue to use broad recruitment criteria; choosing new scientists who are bright and interested rather than attempting to fill specific niche positions.

They were supportive of how the John Innes Centre operates, which reinforces the strength in science.

6.  Plan for flexibility to tackle the unforeseen

Although science programmes are long in their design and realisation, the public would like the John Innes Centre to be mindful of emerging challenges, like global disease epidemics, and retain the flexibility to redeploy resources as fresh challenges arise.