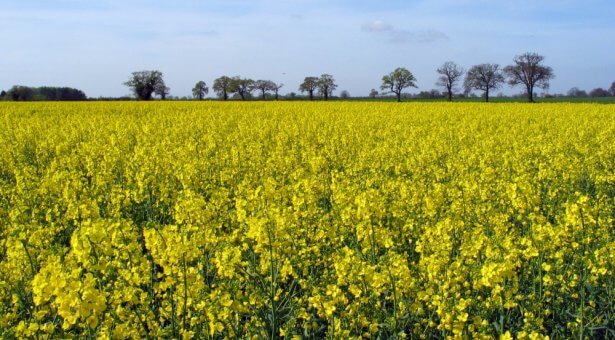 Yield losses in the crop oilseed rape, caused by premature pod shatter have been estimated to be between 10 and 25%.

Many plants disperse their seeds by the shattering of their seed pods, a mechanism known as dehiscence.

Controlling this process should reduce seed losses and wastage, improving yield and reducing the number of plants which grow as weeds (or volunteers) the following year.

Research into pod shatter within the Genes in the Environment research programme has led to new technology to quantify the problem in oilseed rape, as well as identifying genetic markers for reduced susceptibility which are currently undergoing field testing.

Development of a Random Impact Test Machine by Colin Morgan and colleagues here at the John Innes Centre, allowed researchers to determine the extent to which oilseed rape pods shatter allowing quantification of the effect.

Research and testing of new software, podshatteR was published in 2019. This technology has been made available to the plant breeding industry with machines having been commissioned by two companies.

Mark Nightingale, Oilseed Rape Plant Breeder for Elsoms Seeds said, “Elsoms Seeds have purchased a ‘Random Impact Test Machine’ from the John Innes Centre. We use this to screen and select breeding lines within a commercial winter oilseed rape breeding programme. This is another useful tool for us to use in breeding.”

In 2019 the Agriculture and Horticultural Development Board began investigating whether this test platform could form part of the variety selection of oilseed rape for the ‘UK Recommended List’ to provide farmers and growers with independently assessed information on the susceptibility of varieties to pod shatter.

In the Genes in the Environment Institute Strategic Programme we take discoveries from our fundamental science and develop them to deliver value and benefits for industry and society.

The discovery that the plant hormone gibberellin promotes fruit dehiscence in Arabidopsis, which was made in the Sablowski and Østergaard labs, has led to translational work in oilseed rape (Brassica napus) allowing development of new genetic makers, crops and technologies.

Recently we demonstrated that plants in the Brassica family disperse their seeds earlier at higher temperatures, adding valuable knowledge on how our crops may behave in the face of climate change which will help inform our future crop improvement programmes.

This research is ongoing, looking at changes in pod structure on a larger number of oilseed rape lines, as part of a large UK-wide collaborative project called BRAVO (Brassica Rapeseed And Vegetable Optimisation).