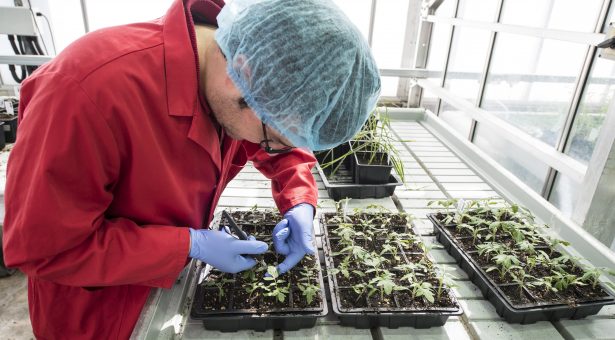 Just like in any industry, staying at the forefront of plant and microbial research involves the development and implementation of new technologies and techniques.

One way in which we remain world-leaders is through our application of emerging technologies, such as genome sequencing. The effective use of these innovative technologies is important for our academic research, but it also provides industry with valuable tools, and ensures we are in a strong position to deliver world class training and provision of training in plant breeding.

Developing a stream of highly-skilled scientists into the plant breeding industry is something which has been one of our core activities over the course of our more than 100-year history.

According to a recent report from the Intellectual Property Office, the UK Plant Breeding Sector supports the UK economy with;

In order to achieve those things, the plant breeding industry needs to constantly innovate in order to develop improved crops. Trained plant scientists are vital in this process, especially given that a 2011 report estimated that between 1988 and 2011, an 88% yield increase for major cereals and oilseed rape could be attributed to genetic improvement.

One of the ways in which we can develop the plant breeders of the future is through our MSc in Plant Genetics and Crop Improvement, which we run in collaboration with the University of East Anglia and was introduced in 1989.

Over the last ten years, 98 students have undertaken the course with between 10-15 new students taken on each year, receiving a mixture of taught and hands-on training in plant breeding including research techniques and methodology. Of the 98, 27% have gone on to work in the plant breeding industry, improving a broad range of crops including cereals such as wheat and rice, Brassicas such as oilseed rape, other arable crops such as sugar beet, forage crops, fruit and vegetables. Meanwhile another 20% have gone into related industries such as agricultural or crop research and pest management.

Chris Burt completed the MSc course in 2002 and went on to work for Floranova, breeding ornamentals. Four years later, Chris returned to the John Innes Centre as a PhD studentship, part sponsored by the Home-Grown Cereals Authority and RAGT.  He went on to work as a Postdoctoral Scientist, before moving back into industry in 2014, joining RAGT as a Cereal Molecular Geneticist.

“The John Innes Centre has been key to my career progression, developing my research skills in a supportive environment and wider crop genetics perspective. The collaborative projects I worked on allowed me to get to know people within the plant breeding industry”.

Lia Arraiano explains; “Coming from the John Innes Centre opens a lot of doors, the scientific knowledge provides a very useful mindset for finding the solutions to problems, which is important for industry and the valuable network that you develop allows you to propose research questions that can be addressed collaboratively between industry and the John Innes Centre.”

Lia completed a PhD in Plant Pathology here in 2001 and went on to continue working in research for a further eight years before moving into the Plant Breeding Industry. She now works as Global Head of Research Laboratories at Vilmorin Mikado, a leading vegetable breeding company based in France and maintains a strong relationship with the John Innes Centre.

As world-leading experts in these technologies, our Crop Transformation team has been able to provide one to three month training for around 5-10 people a year.

One example of a company who have benefited from this are Tropic Biosciences, who aim to develop commercial varieties of tropical crops such as banana and coffee.

Tropic Biosciences, was founded in 2016 and was initially based at the John Innes Centre, with training and support from the Crop Transformation team before they were able to move into bespoke premises on the Norwich Research Park, where they now employ over 20 people.

Our plant breeding training programmes are an important part of our international relationships.

For example, some of our wheat researchers have set up a number of training workshops to help international wheat scientists including four workshops around the world between 2014 and 2018. Each of the workshops trains between 15 and 20 international scientists from agricultural, crop and bioscience institutions, technology centres and universities, covering subject such as Molecular Breeding and have welcomed participants from 18 countries around the world.

The value of these courses was highlighted following one week-long training course at the BecA-ILRI hub in Kenya. After the course, the participants asked how the BecA-ILRI hub could acquire a particular genotyping technology called KASP, a flexible platform, with the capacity of working with relatively few genetic markers from a large number of samples, making it economically viable for breeding programmes (several technologies run thousands of markers from fewer samples which is of less value for breeding programmes).

Thanks to a combination of the course and our established collaboration with the BecA-ILRI hub, it was possible to introduce KASP technology, alongside being able to send our scientists such as Oluwaseyi Shorinola to provide additional training for local scientists in its use. KASP is now being employed to select markers for disease resistance for wheat and other crops and the BecA-ILRI 2017 Annual Report highlights that the tools have allowed local scientists to select 46 markers for disease resistance out of 3,200 over a six-month period, work that would have previously taken them 8-10 years. Resistant markers are also now being trialled in the field in Kenya.

Closer to home, we also play an active part in the Monogram Network, which brings together researchers with an active interest in small grain cereal and grass research, with expertise spanning plant genetics, physiology, pathology, breeding, and bioinformatics.

To enable researchers to extend their capabilities to wheat, a group of our scientists launched the website Wheat-Training.com in August 2016.

The website provides a practical resource aimed at helping researchers who want to work in wheat.  This training resource had seen over 6,000 individual users by July 2019 with over 200 accessing the resource on a monthly basis and users coming from across the world including the UK, USA, France, Germany, China, India and Australia, Canada and Japan.

Professor Parveen Chhuneja, Director of the School of Agricultural Biotechnology at the Punjab Agricultural University was very enthusiastic about the training saying, “I find Wheat Wheat-Training.com a very good resource with a lot of highly useful information about wheat at one portal.  Any researcher/student working on wheat or getting started on wheat will be greatly benefited”.