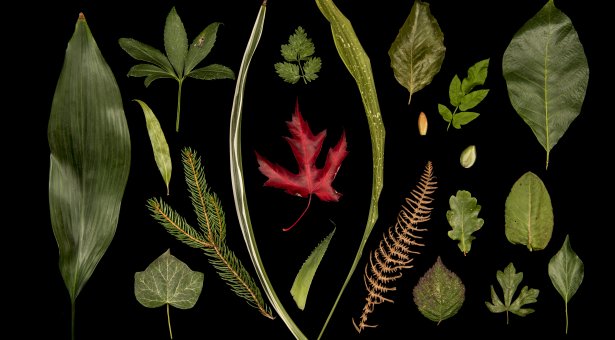 Leaves come in many shapes and sizes, from simple flat blades to elaborate vessel or pitcher shapes found on some carnivorous plants, but how do plants create this diversity of forms?

You might think they do it much as a potter creates different shapes with clay. But unlike pottery, there is no external hand guiding the process of plant growth. Leaves have to construct themselves.

Each leaf starts from a small group of cells in a bud, a fraction of a millimetre across.

The bud turns itself into a leaf through internal rules of growth. We would like to define these rules and understand how they lead to the growth of diverse leaf shapes, from the simplest to the most complex.

The vessel shaped leaves of carnivorous plants are particularly intriguing as this leaf form has evolved four times independently in carnivorous species, as an adaptation to trapping animal prey.

Unlike most plants that absorb nutrients through roots, plants of the Utricularia genus, commonly known as bladderworts, obtain nutrients by trapping small animals within bladders.

Once sucked into the bladder the animal is digested and its nutrients absorbed by the plant. This carnivorous strategy is a particularly valuable in aquatic or damp environments poor in nutrients. The arrangement of these bladders on the plant is illustrated in antique botanical paintings.

How do bladders work?

The bladder trap is set as water is actively pumped out of the interior by quadrifid glands, creating negative pressure and storing elastic energy in the trap.

Prey such as a captured spider-mite trigger the trap by touching hairs attached to the bladder mouth, breaking the trapdoor seal and releasing the elastic pressure stored in the bladder walls, causing the mouth to buckle and open.

Prey is sucked into the trap with the rapid influx of water. This suction trapping mechanism with the trapdoor opening and closing faster than the eye can see takes less than a millisecond. Trapped prey are suffocated due to a lack of oxygen in the bladder.

The quadrifid glands secrete enzymes such as phosphatases to help digest animal prey and extract nutrients.

The bladder also hosts a diverse community of organisms including algae, protozoans and bacterial colonies which may help digest prey and ease absorption of animal nutrients by the plant.

After a bladder has been triggered the quadrifid glands pump water from the interior of the bladder to reset the trap.

Utricularia is the most successful carnivorous plant genus and bladderworts have a global distribution.

There are more than 200 species of Utricularia, with diverse shapes and sizes of bladders. They are found in low nutrient environments, from lakes and bogs, to fast flowing rivers and pools of water collected in trees.

Bladderworts are particularly amenable to scientific study because the bladders are transparent and small, facilitating 3D imaging.

Using Optical Projection Tomography it is possible to capture the complex shapes of bladder traps, use live imaging to see how bladders develop and look inside them to discover internal structures.

A small genome size in some species of Utricularia makes gene sequencing and genetic analysis accessible.

Using a combination of 3D live imaging, mathematical modelling and genetic analysis we hope to gain an understanding of how Utricularia leaves develop and whether similar mechanisms are conserved in other vessel shaped carnivorous plants (Cephalotus), (Nepenthes) and (Sarracenia).

The Albany pitcher plant Cephalotus has vessel shaped leaf traps between three and six centimetres in height. The whole plant is illustrated in botanical drawings and photographs.

Cephalotus follicularis is the only plant in the order Oxalidales to have developed carnivorous habits, in a family with one genus and one species. It is found in only one place in the world, in the peaty swamps of western Australia, where there is little available nutrition in the soil.

How do Cephalotus traps work?

The cup shaped Cephalotus pitcher leaf has a central flange and two side wings with many hairs which guide crawling insects up the pitcher and towards the trap mouth.

The smooth, ridged, red coloured lining of the mouth secretes nectar to attract insects in. Vampire like fangs project over an acidic digestive pool.

The prey, often ants, attracted by the nectar slip into the pool of digestive enzymes (including proteases, phosphatases and nucleases) secreted by glands at the base of the pitcher.

The lid has windows of semi-transparent tissue allowing light to penetrate the interior of the trap. This confuses winged insects which become exhausted and fall in.

Once an insect has fallen into the funnel like structure inside the trap an overhanging ridge prevents escape.

The tapped prey is digested and its nutrients absorbed by the plant.

Nepenthes or Old World Pitcher Plants grow in places with poor nutrition in the Asian tropics.

The Nepenthaceae consists of a single genus containing more than a hundred species. Nepenthes pitchers develop at the end of tendrils extending from leaves as illustrated in botanical drawings and photographs.

Pitchers range in size from a couple of centimetres to pitchers half a metre tall producing up to two litres of digestive soup. Some are climbers, some are ground dwelling and others live in trees.

How do pitcher traps catch prey?

Pitcher traps are modified leaves that act as pitfall traps, capturing insects and other small prey such as insects and ants. There have even been reports of small rodents and birds being found in these traps.

Prey attracted to the leaf by sweet nectar, is guided towards the mouth of the trap by two ladder like wings.

The peristome at the entrance of the mouth is slippery and gravity helps prey fall into the trap.

The pitcher is divided into two distinct domains, the upper part of the trap is coated in a waxy surface so it is difficult for prey to hang on and climb out again.

The leaf has secretory glands which exude digestive enzymes into the pool filling the bottom of the leaf. Once trapped the creature is digested and its nutrients absorbed by the plant.

Nepenthes often interact with communities of bacteria, fungi or larger animals living in the pitchers to the benefit of both the plant and community.

Nepenthes lowii from Mount Kinabalu in Borneo provides nectar to attract small mammals, and a cup-shaped toilet to collect their faeces. Compounds found in the digestive soup of Nepenthes leaves may be medicinally useful.

Anti-fungal agents found in the digestive juices of Nepenthes khasiana are being developed as broadly effective fungicides to treat human fungal conditions.

The video above shows a Trumpet-pitcher leaf trap belonging to the Sarraceniaceae family.

These plants grow in areas of poor nutrition and produce vessel-shaped leaves which act as pitfall traps catching insects which provide valuable nutrients.

There are around ten species in the Sarracenia genus with traps ranging in size from a couple of centimetres to a meter in height. An example of some Sarracenia plants are shown in botanical drawings and photographs.

How do Sarracenia traps work?

Insects are attracted to the tall conical pitcher leaf traps by lures of scent and nectar secreted by the peristome at the entrance to the mouth of the trap.

One species, Sarracenia flava, secretes Coniine in its nectar, a poisonous alkaloid which may paralyse prey.

Insects attracted to the trap fall in and are digested, providing valuable nutrients to the plant. A lid prevents rainwater from diluting digestive juices containing enzymes secreted by the leaf.