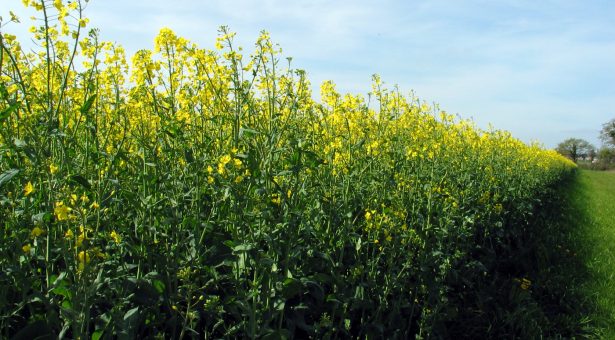 Improving the yield of our crops is essential for working towards global food security.

Oilseed rape is grown on approximately 600,000 hectares of land in the UK, which yields around two million tonnes of grain that is used to produce vegetable oil.

Improving the amount of oil that oilseed rape plants produce is one of the goals of both scientists and plant breeders because it is anticipated that yield is insufficient to meet future needs.

Research to identify and understand the regulation of genes which influence seed size and composition is one way of improving crop yields.

Recent research within the Genes in the Environment research programme will enable an increase in the yield of oil produced within oil crops such as oilseed rape.

Thanks to this work, researchers gained an improved knowledge of gene function using induced and natural variation found in Arabidopsis.

Using genome wide association studies, a powerful tool for linking physical traits to genetic markers, scientists identified the genetic basis for some of the variation in seed size in oilseed rape. This also increased seed oil and protein content.

Experiments involving mutants of Arabidopsis demonstrated that when plants lacked a working copy of UPL3 they had larger seeds with 12% more oil and 13% more seed protein and yet the number of seeds was unaltered.

While these results have been obtained from plants in the cabbage (Brassica) family, similar target genes have also been found in other seed crops including oilseeds such as soybean as well as cereals such as wheat and other crops including peanut and cotton. This means it may be possible to exploit these findings to improve yield of a wider range of crops in the future.

Once crossed into a commercial variety of oilseed rape, this technology could result in

In this project scientists took results from Brassica crops and then used the model plant Arabidopsis to develop a more in depth understanding of the genetics.

Scientists discovered that in the model plant Arabidopsis, reduced expression of the gene UPL3 led to an increase in the protein LEC2 which increased lipid biosynthesis during seed maturation.

Looking at the natural variation of these genes in oilseed rape and comparing this to crop yields they were then able to demonstrate that these important genes had not been selected for previously during the breeding of oilseed rape and therefore this knowledge can be used by plant breeders to develop oilseed rape with higher yields.

Our science can now be used to deliver value and benefits back to industry and society.