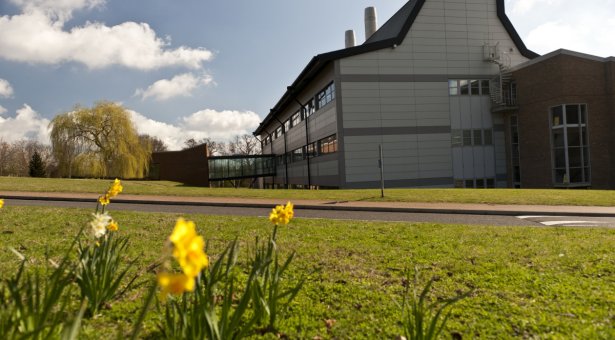 Nominative determinism is the hypothesis that people tend to move towards careers which reflect their names.

One of the most famous examples in Thomas Crapper who built a very successful career as a sanitary engineer. Our own home city of Norwich is proud to boast a rare example of a surviving Thomas Crapper & Sons manhole cover. If you’re interested (we assume Jeremy Corbyn reads these…) it can be found on Tombland.

We thought it would be fun to see how many of the staff at John Innes Centre had taken career paths that matched their names and we found a quite a few nominative determinists.

Given the large amounts of research that have been carried out on legumes and pulses at the John Innes Centre over the years, it’s only right Darrell Bean works here. Sadly (for the theory), Darrel doesn’t work on legumes or pulses directly, instead using his expertise in our entomology department rearing and maintaining invertebrate colonies, which form the basis of a number of studies.

Alongside our labs, we benefit from a Field Experimentation facility nearby, which enables large scale experiments to be carried out. Our fields don’t end there, with 3 Project Leaders among them;

Lars Østergaard is a Group Leader who investigates the genetic and hormonal regulation of fruit development in the Brassicaceae family. Pleasingly ‘Østergaard’ is Danish for ‘East Farm’.

Keeping with the field theme, there is Scott Farrow. Based in the lab, rather than the field, Scott is exploring the different chemicals produced by plants and what uses they may have for society, particularly being potential sources of antibiotics.

Another researcher exploring the role of plants in producing antimicrobials is the aptly named Thomas Germe, who like Natassja works on DNA topoisomerases.

It is estimated that by 2050, we will need to produce 60% more wheat to meet global food demand, so it’s lucky that Nicola Cook is working on fungicide resistance in fungal pathogens of wheat and barley as part of our Designing Future Wheat research programme.

We don’t just need to breed more varieties to help us produce higher quantities of food, we also need those varieties to be as nutritious as possible, which is why Jake Cross is working with Dr Janneke Balk on understanding how our bodies produce energy from the food we eat.

We are very proud that researchers from around the world choose to come and work here in Norwich, and strong ties to institutes across the globe.

CEPAMS is one such joint venture, which we run with institutes in China. Xiufang Xin is one if the CEPAMS Group Leaders exploring the relationship between plants and microbes, which is apt as the Chinese character ‘Xin’ means joy and is used to refer to plants which are flourishing.

With a history stretching back over a century, many of the plants we have worked on during that time can be found in your back garden. Perhaps that is why Andrew Lawn, who looks after our social media accounts and coordinates these blogs, joined our Communications team?