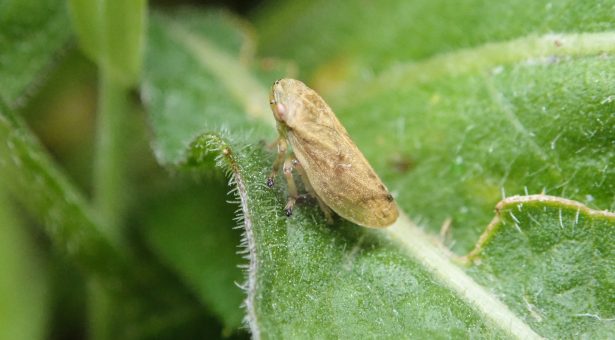 Vector-borne diseases account for more than 17% of all infectious diseases and cause more than 700,000 deaths annually. In plants, sap-feeding insects transmit a diverse group of phytoplasmas that occur worldwide and have destroyed major crop productions and native plants. The present invention provides a method to engineer a plant host to become more resistant to phytoplasmas.

Vector-borne phytoplasmas can cause serious diseases in most vascular plant species and can lead to crop failure. Until now, no mechanisms of host resistance to these vector-borne pathogens are known.

Vector-borne pathogenic bacteria produce effector proteins that are translocated to their hosts to modulate specific host processes, such as developmental processes and immune responses to promote bacterial colonisation. The inventors functionally characterized the effector SAP05 from phytoplasmas, a group of obligate insect-vectored plant pathogenic bacteria that are known to induce massive changes in plant architecture such as witches’ broom-like proliferations of leaves and shoots.

The inventors discovered that SAP05 is responsible for these plant developmental changes by facilitating the degradation of plant developmental regulators via a process that relies on hijacking the plant ubiquitin receptor RPN10. Interestingly, RPN10 is highly conserved among eukaryotes. However, whereas SAP05 binds to plant RPN10, it does not interact with the insect RPN10. The inventors used this discovery to engineer plant RPN10 following the insect RPN10 homolog, and found that a two-amino-acid substitution within plant RPN10 generates a functional variant that is resistant to SAP05 activities.

This strategy reveals a new method that enables engineering for host resistance against insect-vectored diseases. The method entails the following steps: (i) identification of pathogen effector targets in the host, (ii) identification of homologous proteins in the insect vector, (iii) comparing the sequences of the host target and the vector homolog and looking for differences, and (iv) introducing these differences into the host target protein to increase resistance to the vector-borne pathogen.

Group Leader at the John Innes Centre with expertise on the mechanisms that drive interactions between plants and insects and the role of microbes in these interactions.

Former postdoctoral scientist at the John Innes Centre in the group of Prof Hogenhout working to understand how phytoplasma effector proteins manage to modulate both plant development and insect behaviours and contribute to the establishment of the 3-way interactions. Weijie is now a Group Leader at the Chinese Academy of Science (CAS), Shanghai, China where he investigates insect-transmitted plant pathogens.

Former Marie Curie Fellow at the John Innes Centre in the lab of Prof Hogenhout where she studied phytoplasma effectors and their role in hijacking floral development. She is now Group Leader at the University of Ottawa where she investigates plant-microbe interactions.

Former postdoctoral scientist at the John Innes Centre in the lab of Prof Hogenhout where she studied how bacteria transmitted by insects manipulate host plants to attract them. She is now Research Director at Institute for Genetics, Environment and Plant Protection at INRAE, France.